ARTS ARE A CORE CURRICULUM? WHY? GLAD YOU ASKED. 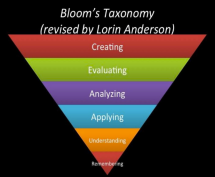 With No Child Left Behind declaring the Arts as a core curriculum (Ed.Gov, 2004), it is increasingly important to recognize and understand the influence of the arts in the education system. Businesses are calling for elevated education standards that include a strong education in the creative arts. According to the National Center for Education & the Economy’s (NCEE) Tough Times Tough Choices, our jobs of the future will depend not only on new and better technologies, but on strong creative leadership, as NCEE outlines:
leadership does not depend on technology alone. It depends on a deep vein of creativity that is constantly renewing itself, and on a myriad of people who can imagine how people can use things that have never been available before, create ingenious marketing and sales campaigns, write books, build furniture, make movies, and imagine new kinds of software that will capture people’s imagination and become indispensable to millions. (NCEE, 2007, pp. 5-6)
America is in a technological transition shifting from a manufacturing to a service driven economy. As the globalization of the world’s economy evolves many middle class jobs are being automated or outsourced to the lowest bidder, and many high skilled jobs are going overseas as we “compete with countries that can offer large numbers of highly educated workers willing to work for low wages” (NCEE, 2007, p. 4). To maintain the United States standard of living we must be on the cutting edge of new technologies and innovative business solutions.
Tomorrow’s workers will require a rich blend of highly developed analytical skills and creative ingenuity. However, the current educational system continues to prepare students for the manufacturing jobs of yesterday answering “political demands for accountability based on high-stakes tests” with “unprecedented standardized testing” (Oreck, 2000). Simultaneously state standards in the arts have been adopted in 47 states (National Center for Education Statistics, 1998), usually without additional funding, as if mandating tests and standards will provide the analytical and creative education needed to ensure success in the new global economy. The connection between process of arts education and standardized testing, offered by the artistic process, is lacking.
The Conference Board and Americans for the Arts, in partnership with the American Association of School Administrators, came together in November, 2007, to develop a survey that would determine whether “educators and executives [were] aligned on the creative readiness of the U.S. workforce” (Lichtenberg, 2008, p. 2). The 1997 survey of public school superintendents and American business executives (employers) reported that:

So Early Born – taking a stand