Ethical Problems in Teaching at a Catholic High School 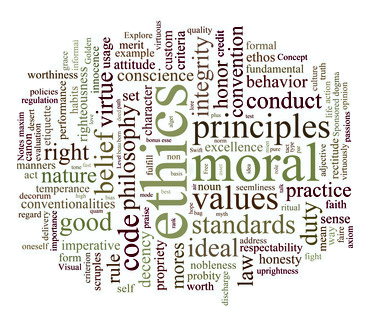 CRITICAL REFLECTION PAPER: HONESTY OR DUTY?
I work at a Catholic High School teaching Drama and Music and chairing the Drama Department. As a teacher at a Catholic school I am required to teach using the ethical guidelines set by the Catholic Church. This is a conservative Catholic parish and they stand by the Catholic Church’s views on abortion, homosexuality, gay marriage, sex before marriage, stem cell research, Sunday Mass attendance, and reconciliation requirements to name a few. I was raised Catholic, understand the teachings, but am not a practicing Catholic. I have a deep spirituality, and although I hold a deep respect for the Church, I find myself at odds with many of their views. During my teaching day, it is not uncommon for the students to share information with me, raise questions, or ask for advice on a particular issue. The problems are varied and complex, and often challenge the teachings of the Church. Do I give an honest response or filter my answer through the lens of the Church? This paper will explore this question, the ethical theories that effect my decisions, how emotions impact the development of an ethical view, and finally how these theories relate to relationship and credibility as described by Kouzes and Posner.
One specific example of this dilemma deals with homosexuality. A freshman (I’ll call her Cathy) was upset about her mother’s lesbian relationship and the fact that she was living in a household with “two mothers”. Cathy had been confused, but not particularly upset about the relationship until she transferred to the Catholic School. She liked her mother’s partner, but was ashamed and embarrassed about her living situation due to the Catholic teachings and the pressure she felt to hide her mother’s lifestyle. Cathy asked me if I thought homosexuality was a sin. In “real life” my response would be a simple “of course not”. Under the requirements of the Catholic Church I am required to say “yes” and share the scripture Leviticus 20:13. What do I do?

I take these types of situations on a case by case basis. In this case my dilemma is clear: do I follow Catholic dogma to the letter or watch out for the well being of Cathy? In this case I chose to watch out for Cathy’s well being. I had known her family for many years, having had two siblings in previous years. I knew the mother and her partner to be women of outstanding character and the father and his live-in girlfriend to be wonderful as well. I saw no help in encouraging Cathy to experience fear and shame, so reinforcing the strict view of the church was, in my view, wrong. I chose to allow Cathy to express, encouraging her to use compassion and understanding to forgive people who were judging her and embrace the family God had given her.

Is it ethical to agree to work at a Catholic school, agree to a contract stating that employment would include teaching according to Catholic dogma, and then break the agreement? My typical reasoning is best explained using the normative theories of consequentiality which “determine what is right by weighing the ratio of good to bad that an action will produce” (Shaw, pg. 52). Utilitarian theory states that “we should always act to produce the greatest possible balance of good over bad by everyone effected by our actions” (pg. 56), using the moralist definition of “good” as “human happiness or welfare”. Since setting aside the dogmatic ruling of the Catholic Church to allow for a loving relationship between mother and daughter brings more “human happiness” to this situation, this would be the ethical choice. An argument may be made that it is immoral to be homosexual and by using utilitarian ethics I am allowing an immoral act to further human happiness, and I agree to disagree with that.
A clearer explanation for the method I use to make ethical decisions is described by W.D. Ross using the concept of prima facie obligation. A prima facie obligation is “an obligation that can be overridden by a more important obligation” (Shaw, pg. 66). Using this argument my obligation to the school was overridden by the more important obligation to help the student.
Emotional Fuel for Ethical Decision Making: Lewis vs. Freud
Emotions play an important part in how I process ethical decisions. As an artist, I value human emotions. The dialogue between C.S. Lewis and Sigmund Freud in Nicoli’s The Question of God illustrates how emotions can cause people to develop two vastly different ways of looking at the world. Both Freud and Lewis experienced loss at a young age.
Freud delved into his past to explain deep depression following his father’s death. He developed psychiatric theories such as “The Oedipus Complex” to explain his intense feelings, and wrote that “the complicated emotional relation of children to their parents… was the nucleus of every case of neurosis” (Nicholi, pg. 25). Freud also asserted that “…one’s ambivalence toward parental authority – especially the positive feelings of that ambivalence – forms the basis of one’s deep-seated wish for God” (Nicholi, pg. 25).
C.S. Lewis’ initial response to his mother’s death led him on a journey through atheism saying, “All religions, that is all mythologies, to give them their proper name, are man’s own invention” (pg. 33). A decade later Lewis changed his mind, embracing Christianity. What made the difference? Freud responded to pain by developing a belief that God was a wish to be out of pain. Lewis responded to pain by developing a belief finding that faith was a “thing of unspeakable comfort”. These are two vastly different views which sprang from the same emotion: grief.
Freud wrote that “ethics are a kind of highway code for traffic among mankind” (Nicholi, pg. 61), suggesting that they “change with time and culture”. Perhaps this is true. Preferring transforming leadership (working to elevate those around me) over transactional leadership (working to control those around me), (Ciulla, 1995), the ethical framework I operate in is intended to encourage relationship and credibility between people.

Kouzes and Posner (2003) describe credibility as the ability to “earn trust and confidence” (pg. xiii). Credibility is best defined in behavioral terms as the ability to “do what you say you will do” (pg. 47). When a person “walks their talk” they are much more likely to be trusted. Credibility is founded on the qualities of honesty, inspiration, and competency (pg. 21) and in earned in the same fashion that one would bank money, through equity and trust.
Leadership credibility is a dialogue, not a monologue, and has three phases that must be addressed: clarity, which requires a clarification of the leader’s and constituents’ needs; unity which requires people be united in a common cause; and intensity, which increases as principles are deeply felt and acted on consistently. When the credibility is strong, relationships flourish, both personally and professionally. Understanding how ethical decisions are made, especially your own, is vital to breaking down problems into understandable frameworks in order to effectively respond and choose the best possible solutions.

Ethical dilemmas are complex and often challenge us to our core. With the many and varied ethical frames from which to view a problem, complex issues require the best in us to come forward in order to solve problems. Self knowledge and clarity of purpose are fundamental to developing an ethical framework from which view, dissect, and solve the ethical challenges of our time. Encountering other belief systems with respect and care will encourage a more successful conversation and foster credibility and strong relationships. In the midst of varying ethical maps, we can open pathways of understanding. In my view this is what is best for the majority.

Thoughts on “LooKING for RICHARD”

So Early Born – taking a stand